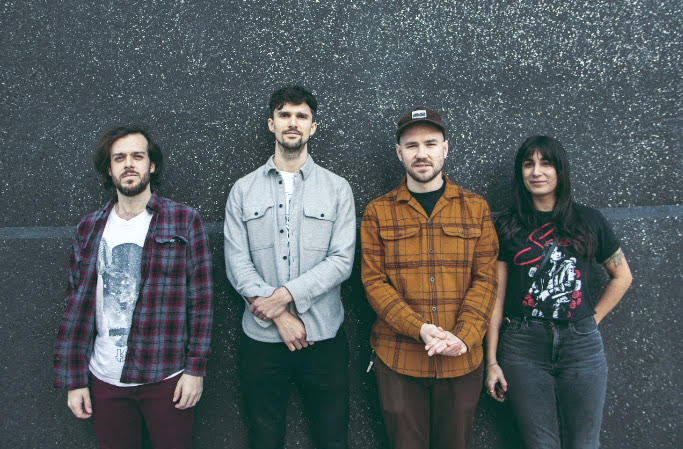 In early 2020, the long-standing three-piece lineup of Kal Marks dissolved. This left Carl Shane, the band’s vocalist, guitarist, and de facto leader wondering if the Boston noise-rock institution he’d started nearly a decade prior would even continue. “Dylan Teggart (A Deer A Horse) reached out to me and asked if I wanted to play music. I knew he was a great drummer, and if anyone could play this kind of music it was him. It got me thinking that I could start a new version of the band. I had all these songs that I wrote for Kal Marks, and it seemed like it would be a waste if I didn’t use them.”

Shane decided to push forward and reached out to Christina Puerto (Bethlehem Steel) to become Kal Marks’ second guitar player—a first for the long-running band. With John Russell joining on bass shortly thereafter, Kal Marks was ready to tread into unknown waters. The
result is My Name Is Hell, the band’s fifth album out August 5th on Exploding In Sound Records.
From the first notes of the album opener, “My Life Is A Freak Show,” there’s something distinctly different about this version of Kal Marks. While Shane still sounds like himself,he allows his voice to sit front and center without any adornments. His vocals appear more human and
vulnerable, which matches the band’s new musical trajectory perfectly. Of course, Shane still kicks in screams that shake the speakers, but he sounds less like a monster and more like a person exorcising their demons.

From track to track on My Name Is Hell, the lyrics tackle everything from losing friends, religion’s toxic touch, the crushing weight of debt, the monotony of the suburbs, and the disgusting nature of the human race. Much like he needed his band to be torn down to build this new version of it, Shane’s songs never give the sense that he’s wallowing in these subjects. Instead, he’s trying to make sense of them and find some peace throughout that journey. By plumbing the depths of his anger, frustration, and sadness, My Name Is Hell admits that we’re all a little scared, angry, and confused, but we’re still trying to navigate the world the best we can.
“A lot of the tragedy and destruction that I’m talking about isn’t happening directly to me, but it affects me,” says Shane. “Any anger I have has boiled over and faded anyway. There seems to be no point in being angry, because it’s not going to change anything. Anger makes a shitty
situation worse. Nobody is coming back to life, and more loved ones will die. I have an emptiness that can never be filled but I’m coping with it.”

On tracks such as “Everybody Hertz” and “Ovation,” the addition of Puerto on guitar shows that Kal Marks is able to evoke new depths as her and Shane’s guitars build off one another, allowing them to serve as meaningful counterpoints and counterbalances to the subject matter
of the songs. In tandem, Teggart and Russell build off the bass-heavy, propulsive sound the band is known for, but they expand upon the sonic palette, weaving in influences from krautrock, electronic and funk. These are big, weird, burly noise-rock songs, but the hooks feel
more pronounced and accentuated. At its core, My Name Is Hell is a pop record.

My Name Is Hell sounds and feels like a fresh start for Kal Marks. After 10 years spent digging into the ugliness of the world, here you can feel the catharsis and commitment to moving forward baked into the music itself. In the face of death, Kal Marks chose to live, and My Name Is Hell is a document of every one of those moments along the way.