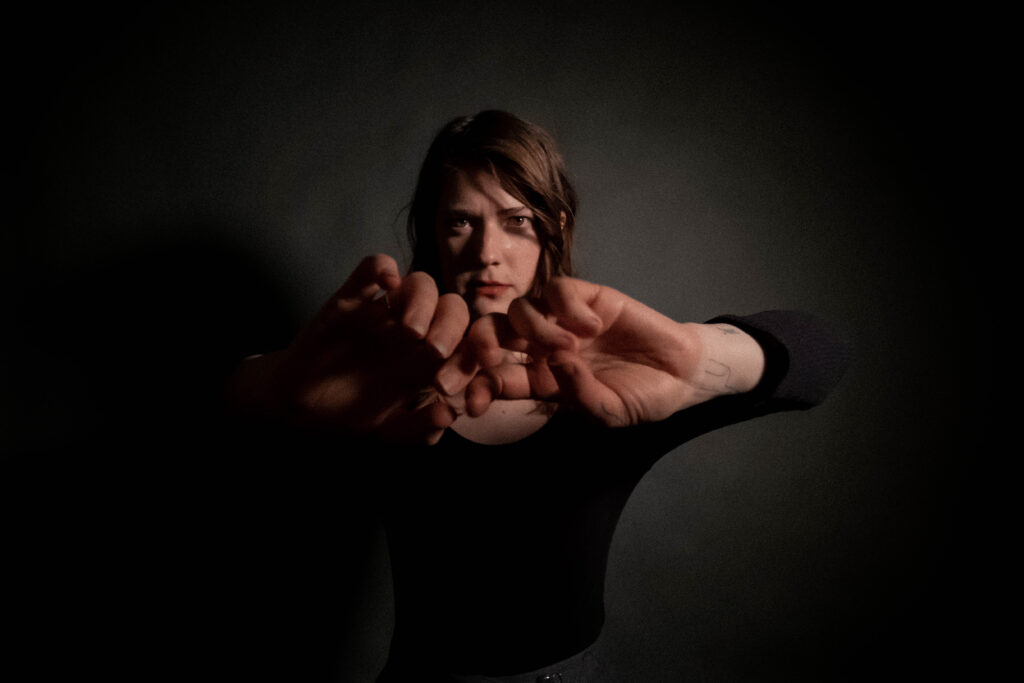 To encounter Lucy Kruger’s music is to witness a singular journey of constant reflection that is producing an ever-widening arc of creativity.

April 2022 sees the release of Teen Tapes (for performing your own stunts) a culmination of the Tapes Trilogy. In June 2021, the Berlin-based South African artist released the third Lucy Kruger & The Lost Boys album, ‘Transit Tapes’ (for women who move furniture around), which serves as a follow up to her 2019 release, ‘Sleeping Tapes for Some Girls’.

Since first embarking on the very specific process of recording music – with an early album that she recorded soon after finishing her arts degree in the Eastern Cape town of Grahamstown – Kruger has approached her artistry with the care of an archaeologist seeking all the interwoven elements that make up the historical whole.

Whether the now finite suite of albums with André Leo as Medicine Boy (More Knives, 2014; Kinda Like Electricity, 2016; Lower, 2018; Take Me With You When You Disappear, 2020), or her solo work, Kruger has engaged in a slow, steady exploration of what it takes to make music that’s universal, that endures, that draws listeners in, even after countless listens.

“I think that what I am able to offer as an artist is a detailed expression of my experience, for although the situation may feel unique to me, the feelings are universal,” says Kruger. “Giving them a sound and shape validates and creates space for those feelings, allowing listeners to feel seen and less alone, even at a distance. Even in the isolation of a bedroom. Especially in the isolation of a bedroom.”

Kruger references the bedroom because it was this most intimate of spaces that gave her the profound realisation that she now brings to all her work. “Albums capture a moment in time in the life of a band or musician. Listeners hopefully stumble upon those albums when they’re in need of stepping into that world, or having that world mirrored back at them.”

Kruger herself stumbled on this revelation when she contemplated what to do with the songs she wrote in her Cape Town bedroom in the year before relocating to Berlin in 2018.

“Over the time of writing I was having difficulty falling asleep at night, or I would fall asleep but wake in the middle of the night and not be able to fall back to sleep,” she recalls. “I would put my headphones on in bed and listen to music, mostly by women musicians. The songs and sounds I was listening to became my bedtime stories, both speaking to things that I was experiencing, as well as soothing me with their sounds and growing familiarity.”

At first unsure whether to take the songs into the recording studio, Kruger also knew that when she moved to Berlin they might not have the same relevance for her; that she risked wanting to slip loose from them forever as that time of sleeplessness and isolation receded. “At that moment I understood that an album is not so much a representation of me as an artist as it is of a specific time – and that it exists to give others the sense of comfort I got from writing the songs on it.”

So before leaving for Berlin, Kruger recorded Sleeping Tapes for Some Girls – a set of lullabies for listeners who might be suffering from the quiet restlessness that the 10-songs document through the combination of Kruger’s hushed, spellbinding vocals and the shifting, swaying instruments.

Transit Tapes (for women who move furniture around) similarly mines and documents deeply personal themes – this time Kruger’s desire to no longer have to keep things neat and contained, and a seeking of space and outward movement. “The songs begin in the bedroom, as with Sleeping Tapes, but with an eye on the window and a hand on the door. There is a restlessness. A kind of building up of courage and the acknowledgement of a fear I had developed around making too much noise or causing too much of a scene.”

While working on the upcoming Transit Tapes, Kruger released two singles – “Formless’ and ‘Loose Ends’ (the latter featuring fellow Berlin-based South Africans Academie) – that had also emerged in her Cape Town bedroom but that “alluded to something slightly less introverted and seemed to want to take up more space”.  Abandoning efforts to make them fit into Sleeping Tapes, the songs recorded during the Sleeping Tapes sessions now function as a transition between the latter and the next stage of documentation, “one that is begging for movement”.  “At some point a song determines its own fate and these two had already moved on,” says Kruger.

Moving on is something Kruger is familiar with. She grew up in Johannesburg where she began writing songs as a 16-year-old and laid the foundation for her absorbing, fervent live performances while studying music and drama in Grahamstown. With a Masters on the horizon, Kruger estimated that her creative exploration would be better served in Cape Town where she then spent several years and first met long term musical collaborator, André Leo. It was with Leo that she first played in Berlin during a Medicine Boy European tour in 2015 (memorable for many reasons including the many trains, buses, and trams that the duo had to take to get to venues with their instruments in tow as part of a decidedly DIY-tour).

It was to propel the music forward that she eventually relocated to the city but Kruger knows that part of the move was also to explore – unfettered – a new space, both physically (mostly on her bike) and metaphysically.

Once more, Kruger is using her music as a bridge on her deeply contemplative, near forensic journey into what shapes an interior and exterior life. “In theme with the process of stepping out and trying to speak a little louder, there is a slightly bolder approach to production on this new record, inviting a fuller and darker sound,” she says of her May 2021 release. “I have moved from my acoustic to electric guitar but the sound remains organic, with tracking done live with the band.”

There are also more themes to explore including the centrality of women in Kruger’s lyrics, as listeners, and in her own life. “There is more pressure on a woman to figure herself out in private and then step out with a formed identity. It’s suffocating,” she says. “How are we supposed to discover who we are if we are not allowed to make a mess? To leak, spill, sweat, spit, shriek. Sometimes playing involves getting scratched or wounded. Laughing. Weeping. It also involves glorious thrill and the chance to surrender. I’m looking for that. Transit Tapes is a gentle and sometimes not so gentle reminder/push/pull to take off my winter coat and run naked like a wild thing towards the water.”

In the end, says Kruger, “I do not know how to write without making it personal, and for now I do not wish to”. She does this as a gift, both to herself, and the listener who might need it on their own journey, filled with all the risks of what it means to be human.

Available: May '22 / always available for Festivals and 1 off shows.