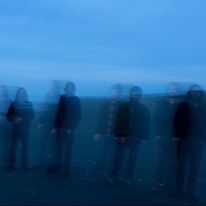 Formed in 2008 in the far reaches of Humboldt County, the band boasts no less than eleven releases in their discography, and they show little sign of slowing down. Their mix of punked-up space rock riffs and laid back cosmiche vibes have always set White Manna as one of the leaders of the modern psychedelic movement. Fueled by mystic forces hidden behind California’s Redwood Curtain, White Manna has been feeding heads a steady diet of transcendent jams at a frenzied pace.

White Manna’s ARC last album builds upon an already impressive discography and further develops the band’s always evolving approach to sound and songwriting. This nine song journey sees the band exploring new directions that are more meditative in nature, a welcome development in light of the current state of world affairs. The song “Mythic Salon” certainly demonstrates such intent, as well as growth.

Arc was recorded at guitarist Anthony Taibi’s 3D Light Studios in Humboldt County, California. The songwriting this time around took on more of an inward process, both musically and thematically.This shift allowed for more spontaneity and improvisation than their previous efforts. This was especially true when it came to translating musical passages that had already become part of the band’s live repertoire. ARC is not a concept album per se, but its focus on such an omnipresent icon certainly leaves the listener a variety of avenues for interpretation, making this the most daring and unique album in the White Manna discography.

Territories: Europe and The Uk